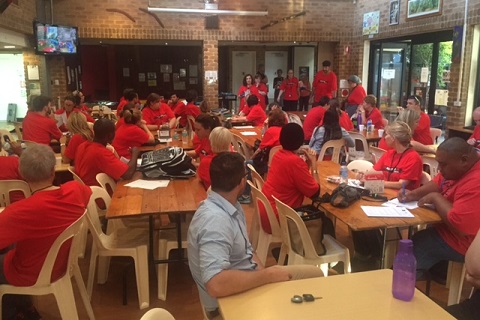 A contingent of Momentum Wealth staff exchanged their stationery and computers for tongs and aprons last month to help serve breakfast for the Salvation Army.

The morning was part of the 2016 Perth Registry Week, which saw more than 130 volunteers survey rough sleepers to better understand their needs for housing, health and support services.

The Momentum Wealth staff helped greet and serve breakfast to dozens of weary volunteers who had been speaking to Perth’s homeless since 3:30am.

Nearly 300 individuals and 7 families were surveyed during the campaign, which captured various data including their length of time sleeping rough, history of child protection or foster care, experiences as victims of violence and key health factors, among other issues.

Momentum Wealth’s participation in the initiative is part of the company’s commitment to REIWA’s Community REInvest program, which helps to support WA’s most vulnerable and disadvantaged people.